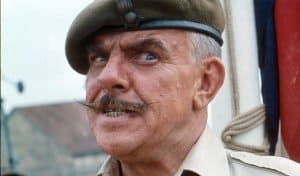 It may seem unlikely, even in the world of British TV sitcoms, that an actor could raise a laugh simply by shouting “Shut up!” at the top of his voice. But that is what Windsor Davies, who has died aged 88, did week after week in the long-running BBC series It Ain’t Half Hot Mum between 1974 and 1981. The pompous Battery Sergeant Major Tudor Bryn Williams, played by Davies, was one of the central characters in the show and his eardrum-shattering bellow never failed to amuse viewers.

The comedy, written by Jimmy Perry and David Croft, the creators of Dad’s Army, was set in British India towards the end of the second world war. It featured the antics of a fictional Royal Artillery concert party based at Deolali – a real place where soldiers were stationed while waiting to be sent into combat. Sergeant Major Williams, known as “Old Shut Up” to his men, is the only professional soldier in the party, keen for his men to see action “up the jungle”, and a bigot to boot.

He has nothing but contempt for the performers in their stage costumes and make-up (especially Gunner “Gloria” Beaumont, who takes the female roles), and particular loathing for one gunner (“la-di-dah Gunner Graham”) on the grounds that he has been to university, while he never misses a chance to remind the Indian bearer Rangi Ram of British supremacy in India.

From this unpromising material, Davies managed to tap into a vein of comedy in the tradition of pantomime slapstick. He also coined the catchphrase “lovely boy”, liberally used by Williams as he delivers the latest ear-bashing to his troops.

At the height of the show’s popularity, Davies and the diminutive Don Estelle, who played Gunner “Lofty” Sugden, recorded a version of the song Whispering Grass as part of a cast album; in 1975, accompanied by a video that featured both men in character, Estelle in pith-helmet and Davies hamming it up for the cameras and twitching his eyebrows, it went to No 1. They made several further recordings together, and released an album, Sing Lofty (1976).

The show’s overt stereotyping – which Perry defended as being an accurate reflection of his own wartime experiences in a touring concert party in India and “one of the funniest series that David Croft and I wrote” – is usually cited as one of the reasons why it is seldom repeated.

Davies was born of Welsh-speaking parents in Canning Town, east London, but soon after the second world war began, in 1940, when he was 10 years old, he was sent to live with relatives at Nant-y-Moel in the Ogmore Valley of south Wales. He attended Ogmore grammar school and later Bangor teacher training college and had stints as a miner and as a factory hand before becoming a teacher in south London. Encouraged by his wife, Lyn, Davies then decided to take a drama course at Richmond College in 1961.

During two years of national service in the early 1950s with the army in North Africa, he had picked up the military manner that was to serve him well as an actor by observing and mimicking his commanding officers. He was good at letting his aspirates collapse as he tried to deal with the recalcitrant men of Deolali – and he had one of the most eloquent moustaches in the business.

Stage work came his way, and after a season in rep at Cheltenham, he was introduced to John Dexter, associate director of the English Stage Company at the Royal Court in London. In 1961 Davies was the Tramp in the company’s production of Arnold Wesker’s The Kitchen and Wallace Morton in Gwyn Thomas’s The Keep.

He had small roles in numerous TV shows, often as police officers or authority figures, and was a paid heavy, Toby, in the Doctor Who story The Evil of the Daleks (1967), before landing the role in It Ain’t Half Hot Mum, alongside Estelle, with whom he had toured in a club double-act. During its run Davies was in two Carry On films, Carry on Behind (1975) and Carry on England (1976), in the latter playing Sergeant Major “Tiger” Bloomer.

His stentorian voice and livid features were also put to excellent use in Grand Slam (1978), a comic film made by BBC Wales. Directed by John Hefin and co-starring Hugh Griffith, it featured Davies as Mog Jones, honorary secretary of Aberflyarff rugby club, whose escapades in a Paris swarming with red jerseys on rugby international day, land him in jail, causing him to miss the match that means so much to him.

The utter frustration and defiance of his bawling “Wa-ales! Wa-ales!” through the bars of his cell is one of the most touching moments in the film. Davies wrote later: “My occupation has given me great pleasure most of the time. Grand Slam was probably the most enjoyable.”

In another long-running sitcom, this time for ITV, he played the antiques dealer Oliver Smallbridge opposite Donald Sinden as his neighbour and business rival in 11 series of Never the Twain between 1981 and 1991. Later TV shows included The New Statesman (1985), Vanity Fair (1998), Gormenghast (2000) and My Family (2004). A meatier role was his portrayal of David Lloyd George in Channel 4’s 1998 series Mosley, about the British fascist leader.

His was the voice of Sergeant Major Zero in the Gerry Anderson puppet show Terrahawks (1983-86) and his unmistakable bass tones were often heard in voiceover and advertising work, notably in a commercial for Cadbury’s Wispa chocolate bars.

In retirement, Davies lived in the south of France with his wife. He married Eluned Evans, known as Lyn, in 1957; she died last year. He is survived by their five children.

‘It’s was about time someone took the bull by the horns and tackled this subject …. … END_OF_DOCUMENT_TOKEN_TO_BE_REPLACED

‘I would like to thank you (Funeralhub). You have made me feel comfortable about some su… END_OF_DOCUMENT_TOKEN_TO_BE_REPLACED

I have now taken out a Funeral Plan and chosen everything I want for my ‘Big Day’!  I… END_OF_DOCUMENT_TOKEN_TO_BE_REPLACED