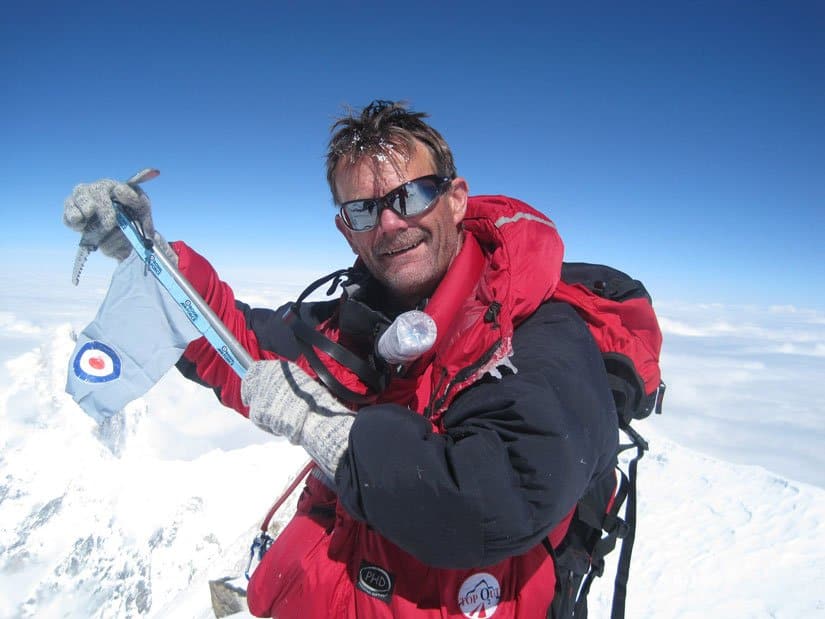 Ted Atkins, who has died in a climbing accident in the Dolomites aged 60. He was a former RAF engineer turned businessman and an accomplished mountaineer and expert in survival at high altitudes.

Atkins made a number of eventful ascents in the Himalayas, including Lhotse, Makalu, Ama Dablam, Kangchenjunga and Everest.  He summited on his third attempt in 2004. He led the first RAF team up the North Face of the Eiger.  Scaled pristine mountains during service in Antarctica, for which he was awarded the Polar Medal.

In addition he set a world record for the highest-ever boat ride. He did this by paddling a collapsible boat on a glacial lake below Everest at 6,300 metres (20,700 ft), and another. A skydiving record.  He was one half of a duo that landed a tandem parachute jump on ground 4,570 m (15,000 ft) above sea level at Ama Dablam.

But perhaps his greatest contribution to mountaineering and other high-altitude activities was the invention of a new oxygen delivery system. It has become the industry standard. In 2016 it earned him an award from the Nepal Mountaineering Association for helping to cut death rates on Everest. Statistics changed from one in every 10 people who make it to the top to one in 700 over the previous decade.

The standard oxygen mask in use during the 1990s and early 2000s had come in for criticism on account of its being uncomfortable to wear, its wasteful provision of oxygen at a steady flow regardless of the needs of the climber, its tendency to leak and its habit of freezing up at high altitudes.

It was on Atkins’s successful third and solo expedition to Everest that he came up with the idea for a modified mask. This was to make oxygen flow from cylinders  controlled via an on-demand system, providing only as much as the lungs pull in, dramatically reducing the amount of wastage.

“I had taken with me a Tornado pilot’s mask and some fittings with no sure idea of the end product,” Atkins recalled. “Sitting outside my tent with all of these bits in front of me the idea came. It was a condom opened and dropped inside a 500 ml coke bottle and the lip folded over the bottleneck. Then a rubber hose sealed over this which led up to the mask. Now as the oxygen flowed while I breathed out, [it] was diverted into the condom reservoir; when I breathed in, I drew the oxygen here. It worked and the rest is history.”

Doubters predicted that he would die. In fact, after reaching the summit he nearly did die, but not because his mask had malfunctioned. A Sherpa who was meant to come up the mountain with his third oxygen cylinder failed to appear. Atkins began to develop hypoxia. For a while other climbers left him for dead. One even blogging news of his death by satellite phone, “so my wife read of my death before I even knew I was dead”.

He was saved in the nick of time by a 25-year-old Sherpa called Mingma. Giving him his own oxygen cylinder before beating a hasty retreat down to safer altitudes. Despite this hiccup, the speed of Atkins’s ascent had been noted by other climbers.  He was asked by the mountaineering expedition organisers Jagged Globe to make a commercial product. Though without using condoms. He also built a plant to produce oxygen in Nepal to guarantee the quality of the gas that Topout supplies. In 2005 Atkins’s Multipurpose Tactical Oxygen System (MTOS) became the industry standard. Later so to his Topout Aero skydive system, developed for the Everest Skydive Team. Which has enabled a number of world records to be set.

The son of a miner, he was born Ian Atkins on August 11, 1958, in Newcastle and grew up at Cotgrave, Nottinghamshire. He attended Toot Hill School in Bingham and caught the climbing bug exploring the rocks of Derbyshire while a teenager with the Air Training Corps at Keyworth.

He joined the RAF aged 18 in 1976, training as an aero engineer. He worked on Nimrod and on Tornado jets and later as the chief engineer on Sea King search and rescue helicopters. Between engineering jobs, he was the Staff Officer RAF Mountain Rescue Service (which he had joined as a volunteer in 1979) in charge of teams in Scotland.

In his early career, he was an RAF champion at boxing. A proficient skier, he also became a Joint Service ski instructor in Alpine and Nordic skiing.

Subsequently, Atkins founded a company, Topout Oxygeneering, to develop the product and went on to produce a new cylinder, cylinder valve, regulator and flow controller. As business took off, he left the RAF in 2007 in the rank of flight lieutenant.

He also built a plant to produce oxygen in Nepal to guarantee the quality of the gas that Topout supplies. In 2005 Atkins’s Multipurpose Tactical Oxygen System (MTOS) became the industry standard – as later did his Topout Aero skydive system, developed for the Everest Skydive Team, which has enabled a number of world records to be set.

During his mountain rescue service, Atkins led the first RAF team to climb the North Face of the Eiger. In 1983 made his first visit to the Himalayas to climb Manaslu. After that, he served as a mountain leader, surveyor and cartographer on an 18-month Joint Services Expedition to Brabant Island, Antarctica, where he made the first ascents of 28 mountains.

There followed a period of service with the Royal Navy in Endurance, both as an engineer and as a mountain leader for the Royal Marines. He was awarded the Marines’ Green Beret. This was for work on an Antarctic rescue mission when he led one of two detachments.

Atkins made his first attempt on Everest via the West Ridge with the Joint Services Everest Expedition of 1988. It got to within 3,300 ft of the 29,028 ft summit before being beaten back by severe weather. He might have succeeded had not his sleeping bag been stolen by another climber. He tried grabbing some sleep in his rucksack. However by the morning his feet were nearly frozen and he gave up the attempt.

In 2001 he returned, leading a 12-strong RAF expedition up the north side. Two members of the team made it to the summit. Atkins, however, had stayed behind to help a friend who had fallen sick because his oxygen supply was not working and had had to be evacuated from the mountain. He gave up at 8,500 m (28,000 ft) in deteriorating weather.

During an eventful trip, he had to cope with a sudden outbreak of violence when the yak men, who herd the animals carrying the climbers’ equipment, attacked one of the expedition’s Sherpas and its sirdar – the head man who pays the porters and yak men – in a dispute over food handouts. The RAF team had to arm themselves with spars, shovels and tent poles to ward off the knife-wielding tribesmen.

The team had taken a lightweight collapsible boat with them. This was because they had heard of climbers who had found their route blocked by large lakes of meltwater on glaciers. When they unfolded it to cross one glacier at 20,000ft, they found that the yak men had vandalised it by removing some of the foam ballast from inside.

None the less it proved seaworthy enough to allow them to cut several hours off their journey and set a world record for the highest boating trip. “This is one we have over the Navy,” Atkins said. “They have a few world records themselves but this is one seafaring record I don’t see them getting back. We plan to get on to the Navy News for an article, just so we can rub it in.”

A Fellow of the Royal Geographical Society, Atkins was a Science and Engineering Ambassador. He was involved in supporting teachers by inspiring young people about science, technology, engineering and mathematics and related career opportunities.

A gifted motivational speaker, he gave talks around the world. In Nepal, where he spent much of his time, he was involved with several charity organisations, was a trustee of an orphanage and was a regular contributor to the Nepali Times on issues of climbing safety.

For the last three years, Atkins had been living in Italy. He died while descending from a via ferrata (protected climbing route) on the more than 3,000m-high Civetta in the Dolomites.– He had climbed the mountain  many times before. The exact circumstances of the accident are still unclear.

He is survived by his wife Shona and by their son.

‘It’s was about time someone took the bull by the horns and tackled this subject …. … END_OF_DOCUMENT_TOKEN_TO_BE_REPLACED

I have now taken out a Funeral Plan and chosen everything I want for my ‘Big Day’!  I… END_OF_DOCUMENT_TOKEN_TO_BE_REPLACED

‘I would like to thank you (Funeralhub). You have made me feel comfortable about some su… END_OF_DOCUMENT_TOKEN_TO_BE_REPLACED