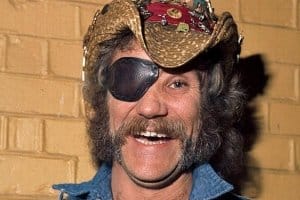 Ray Sawyer’s eye-patch, bristling moustache and battered, badge-festooned hat made him the unmistakable visual signature of Dr Hook & the Medicine Show. Although Sawyer, who has died aged 81, mostly played percussion and sang backup vocals, his voice came to the fore on one of the group’s hits, The Cover of Rolling Stone, which reached No 6 on the US chart in March 1973. This followed the band’s success the previous year with Sylvia’s Mother, which reached No 2 in the UK and No 5 in the US.

The Cover of Rolling Stone led to the group – or at least an artist’s illustration of them – appearing on that magazine’s cover, rubber-stamping it as a nugget of pop history. “From unknown bar band to the cover of Rolling Stone,” as the article styled them. In 2000 the song featured in the rock-biz film Almost Famous, directed by Cameron Crowe, who had conducted the magazine’s original interview with the group.

Both hits had been written for them by the Playboy cartoonist and songwriter Shel Silverstein, who had heard some of their demo tapes in 1970 and adopted them as the vehicle for his work.

Their first recordings of Silverstein’s material were a pair of songs for the Dustin Hoffman film Who Is Harry Kellerman and Why Is He Saying Those Terrible Things About Me? (1971), including Bunky and Lucille, which the group sang on screen. The film’s musical director, Ron Haffkine, took the band to meet the CBS Records boss Clive Davis and they were signed to the label as a result. Haffkine became their producer and manager.

Though the group were writing their own material, Silverstein wrote all the songs for their self-titled debut album (1971) and its follow-up, Sloppy Seconds (1973). Sawyer commented: “We met Shel and there was no comparison between our writing and his. We would never quit recording his stuff as long as he lets us have it because his stuff is so good.”

Subsequently, though, the band did rely increasingly on their own compositions and shortened their name to Dr Hook, though the albums Belly Up! (1973) and Bankrupt (1975) flopped. They returned to hit-making with their version of Sam Cooke’s Only Sixteen, which reached No 6 in the US in 1975, and followed up strongly with A Little Bit More (1976), which made it to No 2 in the UK.

In 1979, they scored a No 1 hit in Britain with When You’re in Love With a Beautiful Woman (it reached 6 in the US), while Sexy Eyes (1980) climbed to 4 in the UK and 5 in the States. However, the band once described in the Melody Maker as “possibly the most incompetent group in the history of rock’n’roll” had now evolved far from their early rootsy sound and were flirting dangerously with disco schmaltz. Sawyer, who had released a solo album (called merely Ray Sawyer) in 1976, quit the band in 1983 to pursue a solo career.

He was born in Chickasaw, Alabama, “a small backwoods place,” as he put it. He started playing the guitar at the age of 11, and was strongly influenced by Hank Williams and New Orleans blues and R&B artists such as Smiley Lewis and Huey Smith. As he matured as a musician, he worked regularly in New Orleans, where he got to know Mac Rebennack (aka Dr John), and was also a familiar face on the city of Mobile’s music scene.

“I was in a lot of bands before Dr Hook,” recalled Sawyer, who was chiefly a drummer in his early years. “Mostly they didn’t have a name, except one was called the Chocolate Papers. I played with a lot of local black bands in Mobile. I sang soul and old rock’n’roll. I must’ve played all the clubs from Houston to Charleston and back.”

He even cut a couple of singles on the Mobile label Sandy Records and received a solitary fan letter for the first one, Bells in My Heart.

When Dr Hook was formed in 1968, it comprised three former members of the Chocolate Papers: Sawyer, the guitarist George Cummings and the keyboards player Billy Francis. Cummings had moved to Union City, New Jersey, and brought the others there to join him, and the line up was completed by Dennis Locorriere, a native of Union City, on lead vocals.

By now Sawyer had acquired his eye patch, having been injured in a road accident in Portland, Oregon, where he had gone to try a new career as a logger. “I decided then that music was for me,” he said. “Anyway, I’ve always been too crazy for anything else.”

After leaving the group, he toured regularly as Dr Hook Featuring Ray Sawyer, having been licensed to do so by Locorriere, who owns the Dr Hook trademark.

Sawyer was inducted into the Alabama Music Hall of Fame in 2005. In 2015, ill health forced him to give up touring.

He is survived by his wife, Linda, and son, Cayse.

‘It’s was about time someone took the bull by the horns and tackled this subject …. … END_OF_DOCUMENT_TOKEN_TO_BE_REPLACED

‘I would like to thank you (Funeralhub). You have made me feel comfortable about some su… END_OF_DOCUMENT_TOKEN_TO_BE_REPLACED

I have now taken out a Funeral Plan and chosen everything I want for my ‘Big Day’!  I… END_OF_DOCUMENT_TOKEN_TO_BE_REPLACED