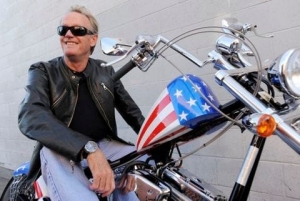 Peter Fonda, a member of Hollywood royalty who starred as a hippie biker in the 1960s
generational touchstone film “Easy Rider,” then shunned stardom only to emerge decades later
in one of his finest roles, playing a reserved beekeeper with explosive depths in “Ulee’s Gold,”
died Aug. 16 2019 at his home in Los Angeles. He was 79. A statement from his family said the
cause was respiratory failure due to lung cancer.
Mr. Fonda grew up in the shadow of his father, Henry Fonda, and older sister, Jane Fonda, both
of whom won Academy Awards for acting. He entered the family business in the 1960s, often
playing renegade characters and acting the part in real life. In 1966, he played a biker named
Heavenly Blues in Roger Corman’s “The Wild Angels,” then was an LSD-taking character in
Corman’s “The Trip” (1967). Mr. Fonda essentially combined the two roles in “Easy Rider,”
which was released in 1969.
He conceived the idea for the film, then called on fellow actor Dennis Hopper to direct the
project. “I figure you direct it, I produce it, we’ll both write it and both star in it, save some

money,” Mr. Fonda said, according to the book “Easy Riders, Raging Bulls: How the Sex-Drugs-
and-Rock ’n’ Roll Generation Saved Hollywood,” by Peter Biskind. The film was made for less

than $400,000. Mr. Fonda enlisted novelist Terry Southern to help with the screenplay, which
followed the two central characters, Wyatt and Billy (played by Mr. Fonda and Hopper,
respectively), on a motorcycle trip across the West toward New Orleans.
“It’s two guys cruising across the country,” Mr. Fonda told the Los Angeles Times in 2007. “I
kept rolling with it: What are they going to find out? I went to the end first and backed up to
make that work.” With cash in hand from a cocaine deal, the two outlaws are joined by an
alcoholic lawyer played by Jack Nicholson. With a powerful rock-and-roll soundtrack featuring,
among other songs, Steppenwolf’s “Born to Be Wild,” Easy Rider was released the same year as
the Woodstock festival and caught the spirit of the age. The “chopper” motorcycles became a
symbol of open-road rebellion, and Mr. Fonda’s character, often wearing a stars-and-stripes
helmet, was dubbed Captain America.
The three adventurers visit a hippie commune, but as they return to the highways they
encounter trouble along the way from mean-spirited police officers and narrow-minded
townspeople, before their journey ends in tragedy.

“Think about that time,” Mr. Fonda said in 2007. “The hippies, the love-ins. We had our own
art, we had our own poetry, we had our own songs, we had our own clothing, our own attitude.
All this stuff that was ours. It didn’t belong to the older generation. . . . What didn’t we have?
We didn’t have our own movie. ‘Easy Rider’ filled the void.”
“Easy Rider” was an unexpected box-office success, taking in $60 million, and the screenplay by
Mr. Fonda, Hopper and Southern was nominated for an Academy Award. The film helped usher
in a new era in Hollywood, giving rise to a generation of auteur directors including Steven
Spielberg, George Lucas and Martin Scorsese.
Mr. Fonda bought an 80-foot yacht and led a life of excess for the next decade, never equaling
the success or esteem of “Easy Rider.” Hopper, Mr. Fonda’s father and his sister all gained
critical acclaim in the 1970s, but Mr. Fonda found himself in films such as “Dirty Mary Crazy
Larry” (1974), playing a thieving bad-boy driver, or in “High-Ballin’ ” (1978), as a rebel truck
driver. In 1983, Mr. Fonda regained some respect as an actor in the German film “Peppermint
Frieden” (Peppermint Freedom), portraying an American soldier in Germany after World War
II. He was cast against type in “Ulee’s Gold,” a 1997 film written and directed by Victor Nunez.
When filming began in rural Florida, Mr. Fonda showed up with his waist-length hair shorn and
wearing gold eyeglasses, similar to those his father wore in his Oscar-winning performance in
“On Golden Pond” (1981). In “Ulee’s Gold,” Mr. Fonda played Ulysses Jackson, an emotionally
closed widower who unexpectedly finds himself raising his two granddaughters.
“This film calls for deep reserves of backbone from its terse hero, and Mr. Fonda supplies them
with supreme dignity and grace,” critic Janet Maslin wrote in the New York Times. She called
his performance “quietly astonishing,”
Mr. Fonda was nominated for an Oscar for “Ulee’s Gold” and won a Golden Globe Award as best
actor. He said he didn’t have to search far to find his inspiration in portraying Ulee Jackson. “I
knew Ulee well,” he told the Los Angeles Times in 1997. “He’s a recalcitrant man with a visage
that shows no hint of kindness. I had breakfast across the table from that guy my whole life …
Oh boy, did I know that guy. Son of a bitch, it was my father.”
Peter Henry Fonda was born Feb. 23, 1940, in New York City. His father was already an
established Hollywood star; his mother was an emotionally fragile socialite. His parents’
marriage was always rocky, and Mr. Fonda’s mother died in 1950. At first, he and his sister, who
is two years older, were told she had a heart attack. They learned a few years later that her death
was a suicide.
In 1951, soon after Henry Fonda remarried, 11-year-old Peter was seriously wounded when he
shot himself with a pistol.
“The bullet went through my stomach, my liver, my kidney,” he told Premiere magazine in 1997.
“The doctor walked out of the O.R. and said to my sister, Jane, and my grandmother, ‘I’m sorry
. . . There’s nothing more I can do.’ . . . Then one of the interns poked his head in the waiting
room and said, ‘We got his heart started again.’ Mr. Fonda always said the wounding was an
accident, not a suicide attempt.
During his rebellious teen years, he was sent to live with an aunt and uncle in his father’s
hometown of Omaha, where he attended what is now the University of Nebraska at Omaha. He
acted in local stage productions, then made his Broadway debut in 1961. He appeared in his first
film, “Tammy and the Doctor,” in 1963.
Throughout the 1960s, Mr. Fonda cultivated a reputation as a drug-using rebel, smoking
marijuana, taking LSD and befriending rock musicians. Somehow, his dissipated life never

affected his good looks or physique: The 6-foot-2 Mr. Fonda maintained a 32-inch waist into his
60s. He wrote about his wild years, marked by numerous affairs — and his distant relationship
with his father — in a 1998 autobiography, “Don’t Tell Dad.”
He and his father eventually warmed to each other and became close in the years before Henry
Fonda’s death in 1982. Peter Fonda’s first two marriages, to Susan Brewer and Rebecca “Becky”
Crockett McGuane, ended in divorce. Survivors include his wife of eight years, Margaret
DeVogelaere; two children from his first marriage, actress Bridget Fonda and Justin Fonda; his
sister; and a grandson.
After the success of “Ulee’s Gold,” Mr. Fonda had a remarkable Hollywood resurgence as a
character actor, playing dozens of roles, most notably as an amoral record producer in “The
Limey” (1999) and in the 2007 western “3:10 to Yuma.” He completed several films that have
not yet been released.
In time, Mr. Fonda finally became reconciled to his talent, his heritage and his place in
Hollywood history.
“I’m not chasing fame,” he said in 1997. “I was born famous. If I were digging ditches today, the
guys at the other end of the ditch would say: ‘You know who that is? That’s Jane Fonda’s
brother.’ Or Henry Fonda’s son. No matter what, I’ll never escape that.”

‘It’s was about time someone took the bull by the horns and tackled this subject …. … END_OF_DOCUMENT_TOKEN_TO_BE_REPLACED

I have now taken out a Funeral Plan and chosen everything I want for my ‘Big Day’!  I… END_OF_DOCUMENT_TOKEN_TO_BE_REPLACED

‘I would like to thank you (Funeralhub). You have made me feel comfortable about some su… END_OF_DOCUMENT_TOKEN_TO_BE_REPLACED