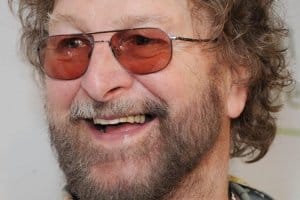 Chas Hodges was born in Edmonton, London UK in December 1943. He is best known for being one half of musical act, Chas & Dave. The duo was founded in 1975.  They are known for being the creators of a musical style labelled “rockney” – a mix between rock and cockney.  Described as ‘Full On Party Music!’

Along with David Peacock, the two created a style which was known as “pub singalong, music-hall humour, boogie-woogie piano and pre-Beatles rock ‘n’ roll”.

The big time came when their 1979 song, Gertcha. peaked at number 20 on the UK singles chart. Gertcha was the first of eight Top 40 singles the two would release  also producing nine charting albums.

The 1970s and 1980s, saw the boys at the height of their fame  releasing hits such as Rabbit and Snooker Loopy. But right up to Chas’s illness they were always doing something on TV or live.

But before co-founding Chas & Dave, Chas had made a name for himself in the music business. He worked with producer Joe Meek and backing Jerry Lee Lewis & Gene Vincent. He also played with Mike Berry and The Outlaws along with Ritchie Blackmore, and Cliff Bennett and the Rebel Rousers.

He was also a writer, releasing Chas & Dave: All About Us in 2008. It reportedly took him eight years to write. Chas also wrote a Rock n Roll Allotment column in the Daily Express.

Their first studio album in 18 years, Chas & Dave released That’s What Happens in 2013. Just four years later and Chas was sadly diagnosed with cancer of the oesophagus, releasing a statement on social media saying that the illness has been caught at an “early stage”. Chas was always grateful for his success and the adoration of the fans.

I have now taken out a Funeral Plan and chosen everything I want for my ‘Big Day’!  I… END_OF_DOCUMENT_TOKEN_TO_BE_REPLACED

‘I would like to thank you (Funeralhub). You have made me feel comfortable about some su… END_OF_DOCUMENT_TOKEN_TO_BE_REPLACED

‘It’s was about time someone took the bull by the horns and tackled this subject …. … END_OF_DOCUMENT_TOKEN_TO_BE_REPLACED