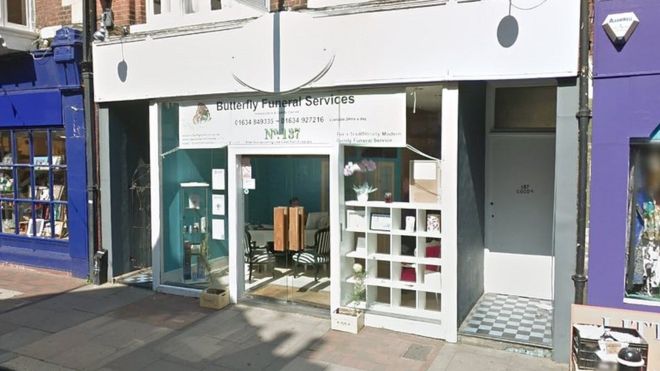 A Man stole corpse when he broke into a funeral parlour. He took his mother-in-law’s corpse. He feared he would not get it back in time for the service, it has emerged. The man raided Rochester’s Butterfly Funeral Services having heard it was going bust. Kent Messenger reported.

He then took the body to Medway Funeral Directors in Strood which has confirmed it dealt with the service instead.

Manager Robert Lawrence told BBC Radio Kent: “It did happen… It was a very difficult situation to deal with.”

Mr Lawrence said his office tried to contact Butterfly Funeral Services without success after “the client came to us for advice” about a year ago.

Then added: “He told us he had been to police and said he was going to break-in and take his mother-in-law’s body away and bring her to us.

“We checked with the police and they confirmed everything. Then he told us the morning he was going to do it and arrived at our office with her.

“It was difficult to watch him go off and do it alone, but unfortunately our hands were tied.”

People who worked nearby helped shield the body from the public as it was removed from the building and loaded into a van.

“I was panicky because it’s not every day you’re dealing with someone trying to wheel a dead body out from next door.

“But obviously we were trying to keep him calm as well because he was frantic, saying he was going to smash things. Obviously just trying to get the problem resolved,” she said.

The bereaved man, who wants to remain anonymous, told Kent Messenger he had “no option” but “to get the body out” after struggling to contact the owner.

He said he broke in via a side door of the property in Rochester High Street. He then took the corpse to Medway Funeral Directors in a hired van.

The man said he spent two days at the police station trying to track the owner down. Adding that he “didn’t want to bother” his wife who “still to this day doesn’t know what happened”.

Later, bailiffs repossessing the site found about 16 urns of ashes that had not been returned to family members.

James Brown, Head of Regulatory Services at Medway Council, said: “We have been contacted by a funeral director who will be returning a number of urns to Medway Crematorium.

“Once we’ve received them, where we are able we will contact individual families.

“We know how important it is for families to say goodbye to their loved ones and we will do all we can to reunite families with the urns.”

The owner of Butterfly Funeral Services has been contacted for a comment.

I have now taken out a Funeral Plan and chosen everything I want for my ‘Big Day’!  I… END_OF_DOCUMENT_TOKEN_TO_BE_REPLACED

‘I would like to thank you (Funeralhub). You have made me feel comfortable about some su… END_OF_DOCUMENT_TOKEN_TO_BE_REPLACED

‘It’s was about time someone took the bull by the horns and tackled this subject …. … END_OF_DOCUMENT_TOKEN_TO_BE_REPLACED