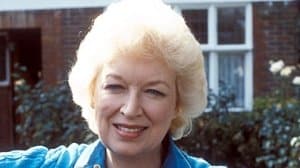 DAME June Whitfield, who has died aged 93, was a comedy actress most famous for her association with Terry Scott in the sitcom Terry and June, although in her long career in comedy, she appeared with many other leading men including Tommy Cooper, Tony Hancock, Stanley Baxter, Benny Hill, and Eric Morecambe. The writer Barry Took once joked that June Whitfield had supported more actors that the Department of Health and Social Security.

Largely because of Terry and June, critics often dismissed Whitfield as safe and suburban and although in her personal life that was true – she married a chartered surveyor called Tim and lived in Wimbledon for more than 50 years – she did move with the comedy times. She appeared in the Goons’ first ground-breaking television show, for example, and joined Julian Clary for two of his television series. Her career was also reinvigorated in the 1990s when she played the batty, kleptomaniac mother in Absolutely Fabulous.

In becoming a performer, Whitfield, who grew up in Streatham, was fulfilling the frustrated ambition of her mother, whose own parents had forbidden her from becoming an actress. When she was three, June was sent to the Robinson School of Dancing, Elocution, Pianoforte and Singing and when she was five made her first appearance in a play (the role was ‘A Boy’).

In 1942, she won a place at RADA, where her contemporaries included Richard Attenborough and Bryan Forbes, and from the start, she was drawn to comedy rather than drama. “I always hated the idea of taking myself too seriously,” she said, “and, as a result, I developed a kind of aversion to heavy, serious roles; it was lack of self-confidence really.” It was only much later in her career, long after her success in comedy, that she gained that self-confidence and took on straight parts.

After RADA, Whitfield began to find roles in touring plays, but rarely had a career plan other than a strong desire to keep working. By the late 1940s, she was beginning to get noticed, including in The Glasgow Herald in 1948. The review was for a tour of a play called A Desert Song on a night when Whitfield, as understudy, had to step up and take the leading role. The review read: “June Whitfield, after a shaky start, proved herself to be as capable an artist as she was a charming heroine. Hardly a Hollywood case of the understudy’s dream coming true for Miss Whitfield has played the part before.” Whitfield kept a copy of the review with the words “furious, untrue” written over it – she had barely learned the part, never mind played it before.

By 1950, Whitfield had worked for Noel Coward on stage, and by 1951 had made her first appearance on television in The Passing Show, a musical nostalgia programme. Her first major steps into comedy included the Goons’ series Idiot Weekly, Price 2d and the radio show Take it From Here. Written by Frank Muir and Denis Norden, it became famous for its Archers spoof The Glums in which Whitfield played Ron Glum’s fiancé  Eth. It ran for more than 325 episodes and Whitfield considered it one of the happiest experiences of her career.

By the early 1960s, she was married and living in Wimbledon and in her professional life was starting out on the first of the many collaborations with the leading male comics of the day for which she would become well known. She worked with Stanley Baxter on his 1964 series Baxter On and several times with Tony Hancock, most famously playing the exasperated nurse in The Blood Donor. As others did, Whitfield found Hancock insecure and ill-suited to bearing the responsibility of his success. Watching him struggle also made her reflect on her own career. “I’m sure one of the reasons I’ve kept going so long,” she said, “is I’ve never had to bear the sole responsibility for a show and had to deal with the pressure that involves.”

She first worked with Terry Scott when they played husband and wife in Scott’s sketch series Scott On and in the sit-com Bless This House – and it began an association that defined both their careers. By the early 70s, they had been given their own sitcom Happy Ever After, which became Terry and June in 1979. So convincing was the husband and wife act that many people thought they really were married. Seen out with her real husband Tim, people would sidle up to Whitfield and ask her where her husband was.

Whitfield’s partnership with Scott lasted 20 years in all, although Terry and June always divided opinion, with the public loving it and the critics hating it. Whitfield herself was proud of its middle-of-the-road vibe, though, and said the BBC ignored middle class tastes and lives at their peril. However, after 106 episodes, the BBC appeared to give in to the critics and axed the show in 1987.

By that time, comedy was moving firmly in a new direction and, even though she had appeared in more than 1000 radio and television shows, there was a danger of Whitfield being left behind. Five years later, however, she was offered a small part in the pilot for a new sit-com called Absolutely Fabulous. Whitfield’s agent advised her to turn it down because it was so small but Whitfield thought it was funny and agreed to do it. Just as well, because the part of the mother in Jennifer Saunders’ new comedy was a triumph. It ran to five series and several specials and Whitfield was in every episode.

“There’s no doubt that it was real shot in the arm to my career,” said Whitfield later. “Suddenly, directors began to realise that I was neither dead nor mouldering away in a deckchair in Sussex, and more jobs started to come in.”

With the phone ringing again, Whitfield appeared with Julian Clary in Terry and Julian and All Rise for Julian Clary, an episode of the American comedy Friends set in London, and, when she was 70, took on one of her few serious roles in the film Jude starring Christopher Eccleston. She also received acclaim for playing Miss Marple in a series of adaptations of the Agatha Christie drama for Radio 4 and on Radio 2 was well-known for her appearances on the long-running show The News Huddlines with Roy Hudd.

When asked how she had managed to adapt to changing moods in comedy and acting, Whitfield would reply that she had always acted the same way – it was what went on around her that had changed. In later years, she mixed comedy and drama, appearing in Last of the Summer Wine as well as making a cameo appearance in Coronation Street. She also appeared in Doctor Who and Midsomer Murders.

Whitfield may have played mainly conventional figures, such as June Medford in Terry and June and disapproving matriarchs in several of the Carry On films, but she remained popular because she seemed able to project a warmth that audiences liked – even though she played down her own stature, even calling her memoirs And June Whitfield.

“I found a way of playing ‘me’ that wasn’t really me” she said (although she admitted the real June was much less tolerant). As for the long list of high-profile comedy actors she worked with, when asked if there was a rule to working with them, she always replied: “don’t upset the comic”.

Whitfield was given a Lifetime Achievement Award at the 1994 British Comedy Awards and inducted into the Royal Television Society’s Hall of Fame in 1999. In 1985 she was made an OBE, and in 1998 a CBE. She was made a dame in the 2017 Birthday Honours for her services to drama and entertainment.

‘It’s was about time someone took the bull by the horns and tackled this subject …. … END_OF_DOCUMENT_TOKEN_TO_BE_REPLACED

I have now taken out a Funeral Plan and chosen everything I want for my ‘Big Day’!  I… END_OF_DOCUMENT_TOKEN_TO_BE_REPLACED

‘I would like to thank you (Funeralhub). You have made me feel comfortable about some su… END_OF_DOCUMENT_TOKEN_TO_BE_REPLACED