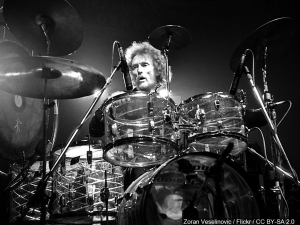 Before the arrival of Ginger Baker the drummer used to be the quiet one sitting at the back of the stage whose job was to keep time. Baker, who has died aged 80, pioneered the image of the rock drummer as a flamboyant virtuoso, engaged in a dynamic interaction with the musicians around him. According to Neil Peart, the drummer from the Canadian band Rush: “Every rock drummer since has been influenced in some way by Ginger, even if they don’t know it.” Baker found fame with Cream, the 1960s rock trio also featuring Eric Clapton and Jack Bruce, whose two-year career inspired a new wave of blues-based rock bands. Cream is now seen as the first “supergroup”, comprising outstanding musicians each of whom was blazing a trail on his respective instrument. Baker brought a freewheeling energy to his drumming, prompting comparisons to the jazz drummer Art Blakey. He was not abnormally fast or flashy, but he was innovative, using twin bass drums and displaying a flair for African-influenced beats, to which he had been introduced by the British Jazz Drummer Phil Seaman. Baker often claimed he never practised, but relied on spontaneous inspiration when playing with other musicians. Cream’s stage shows often featured improvisations lasting 20 minutes or more, and the group’s 1968 album Wheels on Fire included a 16 minute version of Willie Dixon song Spoonful, and 16 more minutes of Baker’s drumming showcase Toad. The idea of using the drumkit as a solo instrument was an innovation ascribed to Cream, though one that listeners would find a mixed blessing in years to come. The band was undeniably adept, however, at creating unusual but commercially potent singles. Hits such as I feel Free (1969), White Room (1968), Sunshine of Your Love (1968), Tales of Brave Ulysses (1967) and Badge (1969) are some of the most atmospheric, rhythmic and distinctive compositions of their era. In 1962 Baker, then a jobbing drummer in London’s jazz clubs, had been recommended by Charlie Watts, the future Rolling Stones drummer, for a job with Alexis Korner’s Blues Incorporated, where he first encountered Bruce. Along with Graham Bond and the saxophonist Dick Hexstall-Smith, the pair formed the Graham Bond Organisation playing a form of jazzy rhythm and blues that won them a devoted following. However, they also developed a hostility that eventually led to Baker firing Bruce from the band.

‘It’s was about time someone took the bull by the horns and tackled this subject …. … END_OF_DOCUMENT_TOKEN_TO_BE_REPLACED

I have now taken out a Funeral Plan and chosen everything I want for my ‘Big Day’!  I… END_OF_DOCUMENT_TOKEN_TO_BE_REPLACED

‘I would like to thank you (Funeralhub). You have made me feel comfortable about some su… END_OF_DOCUMENT_TOKEN_TO_BE_REPLACED

Choosing a Celebrant
Scroll to top