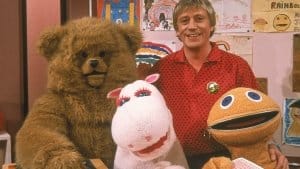 Geoffrey Hayes, the relentlessly cheery adult in the room in the long-running children’s TV show Rainbow, has died at the age of 76.

Hayes was known for maintaining a smiley order over the puppets on the popular ITV show. He dressed in lurid outfits such as floral shirts & yellow dungarees for a 1,000 episodes between 1974 & 1992.

Hayes was surrounded by his family when he died in hospital from pneumonia. According to his agent, Phil Dale. “Geoffrey passed away in hospital with his wife, Sarah, and son, Tom, by his side.”

“The family would like to express their thanks to the many fans over the years. It always gave Geoffrey so much pleasure to know that he and his Rainbow team had given so much fun to TV and theatre audiences.

The Pre-school show was a British answer to the US children’s hit show Sesame Street, on a much lower budget. It featured three other characters: Bungle, a boyish teddybear played by various actors in a bear suit, and two puppets – George, a slow-witted pink hippo and Zippy, a know it all yellow felt robot with a grating voice.

Hayes presided with a gleeful enthusiasm and occasional flask of exasperation. Hayes’ threat to silence Zippy by fastening his mouth was the one element of suspense on the show.

He said the secret to the programme’s popularity was that it was full of “magic, innocence and imagination”. He added: “Practically all the time people come up to me and it really breaks me up because they thank me for being part of their childhood. It makes me want to cry sometimes.”

Hayes did have other acting roles, including stint as DC Scatliff in the BBC  series Z Cars. But after Rainbow he struggled to find work and complained of being typecast as the Rainbow presenter.

“Directors could only think of me as Rainbow’s Geoffrey”, he told the Daily Express he even spent time stacking shelves at a Sainsbury supermarket.

Later he embraced his association with Rainbow by appearing in a nostalgic stage version of the programme at the Edinburgh Festival..

He also appeared in pantomimes & TV gameshows. These included an episode of Never Mind the Buzzcocks in 2002 & Pointless Celebrities in 2015. He joked that the one good thing to come out of the cancellation of the Rainbow. It was earning “loads of money as an ironic post modern icon”.

Ronnie Le Drew, the actor who played Zippy, said “We’ll all miss him terribly”. Speaking to BBC Radio 5 Live he added: “He was really kind to everybody and always charming.”

“Another part of the 1980s childhood has gone,” tweeted the former Labour MP Tom Blenkinsop.

‘It’s was about time someone took the bull by the horns and tackled this subject …. … END_OF_DOCUMENT_TOKEN_TO_BE_REPLACED

I have now taken out a Funeral Plan and chosen everything I want for my ‘Big Day’!  I… END_OF_DOCUMENT_TOKEN_TO_BE_REPLACED

‘I would like to thank you (Funeralhub). You have made me feel comfortable about some su… END_OF_DOCUMENT_TOKEN_TO_BE_REPLACED