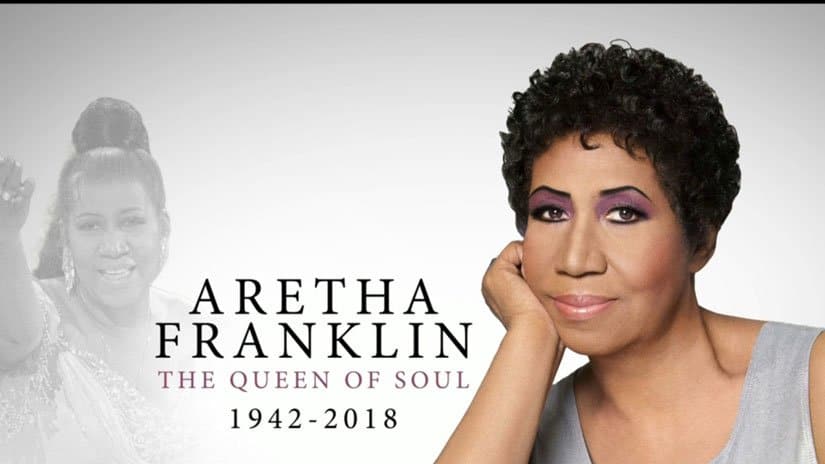 Aretha Franklin possessed one of the most distinctive and influential voices in the history of popular music.

In a 50-year recording career, she racked up 20 Top 10 albums. A dozen million-selling singles and earned no fewer than 18 Grammy awards.

An artist of immense versatility. Her powerful voice, trained in the gospel tradition, moved on to embrace jazz, soul and rhythm and blues. The influential Rolling Stone magazine rated her as the greatest singer of all time.

Aretha Louise Franklin was born in Memphis, Tennessee, on 25 March 1942. She was the daughter of CL Franklin, a Baptist minister, and his wife Barbara, an accomplished gospel singer.

By the time she was six, she and her family had moved to Detroit. There the young Franklin learned to play the piano and began singing in her father’s church.

Her father’s serial infidelities finally saw the break-up of her parents’ marriage. Her mother left the family home and moved to Buffalo, New York, where she died from a heart attack aged 34.

Her father became a respected figure among Detroit’s black community, and his church a centre for gospel music. The young Franklin came into contact with a number of musicians, including Smokey Robinson and Sam Cooke.

.Encouraged by her father she made her first recording, the album Songs of Faith, when she was just 14. Also by which time she had already given birth to her first son, Clarence.

She had a second child, Edward, when she was 16 but was able to maintain her singing career. So her grandmother offered to raise the two boys.

By now her talent was reaching a wider audience. Producer Berry Gordy tried to sign the young Franklin to his new Motown record label. Her father turned down the offer.

Sam Cooke tried to persuade her to sign with his label, RCA. But she had already been spotted by one of Columbia’s talent scouts. That was the label on which she first entered the R&B charts in 1960 with Today I Sing the Blues.

While she had two further R&B hits with Columbia, she only managed to scrape into the mainstream US Top 40 once, with Rock-a-Bye Your Baby with a Dixie Melody.

But Columbia failed to exploit the potential of her gospel voice. Their insistence that she record girl group-style pop, such as The Shoop Shoop Song (It’s in His Kiss), saw Franklin move over to Atlantic Records in 1966

Her first recording on the new label, I Never Loved a Man (The Way I Love You), proved to be her breakthrough. It went to number one in the rhythm and blues charts and reaching number nine in the pop charts.

Her second Atlantic single became her best-known song. Originally written and recorded by Otis Redding, her gospel-tinged rendition of Respect went to number one in the US charts and reached number 10 in the UK.

The song, on which she was backed by her sisters Carolyn and Erma, became an anthem for the feminist movement in the United States. It won Franklin two Grammy awards.

Franklin also became an icon for the US civil rights movement. Now dubbed, “Lady Soul”, she was presented with an award by Martin Luther King. She also became only the second African-American woman to appear on the cover of Time magazine.

She had three more US Top 10 hits in 1967, including the Carole King/Gerry Goffin single (You Make Me Feel Like) A Natural Woman. King later featured the song on her groundbreaking 1971 album Tapestry.

By this time her seven-year-long marriage to her manager, Ted White, who had also co-written many of her songs, was breaking down. Franklin was experiencing difficulties in following up her early run of Atlantic hits.

There were rumours she had begun drinking heavily and, in 1969, she was arrested for disorderly conduct. Meanwhile, her father had hosted a controversial conference for a black separatist group that ended in a violent confrontation with Detroit police. It left one officer dead and several other people wounded.

While she continued to churn out hits, such as Don’t Play That Song, Call Me, Bridge Over Troubled Water and Spanish Harlem, she was becoming increasingly disillusioned with Atlantic, who were grooming a new star, Roberta Flack, for stardom.

The 1978 album Diva, an ill-advised attempt to cash in on the craze for disco, was a commercial flop and became her last recording for Atlantic.

A year later her father was shot during a burglary at his Detroit home, an event which left him in a coma until his death in 1984.

Franklin’s behaviour was giving cause for concern.  She had to cut down on her touring after developing a phobia of flying.

Yet her appearance in 1980 film The Blues Brothers gave her career the lift it needed. A recording contract with Arista that saw her return to the charts with the album Jump to It. Its title track became her first US Top 40 hit in six years.

Follow-up album Who’s Zoomin’ Who?, a mixture of pop, rock and dance, became Franklin’s first ever platinum-certified album. Released in 1985, it contained hit singles Freeway of Love, the title track and Sisters Are Doin’ It for Themselves. A Top 20 duet with the Eurythmics.

Her next album, Aretha, continued to build on her success, It included the hits Jimmy Lee and a version of Jumpin’ Jack Flash, produced by and featuring Keith Richards. Also her Grammy-winning duet with George Michael, I Knew You Were Waiting (for Me).

But her career again hit a plateau. She made a return to gospel with the album One Lord, One Faith, One Baptism, which received much critical praise, and a Grammy award, but failed to trouble the charts.

The follow-up, Through the Storm, also failed to make an impression, despite a duet with Elton John which did get into the singles charts.

In 1987 Franklin became the first woman to be inducted into the Rock and Roll Hall of Fame, while in 1994 she received a Grammy award for lifetime achievement. But her career had stagnated.

She continued to record, without great success and reprised her role as the owner of a restaurant in the film Blues Brothers 2000, for which she recorded a new version of Respect.

Franklin set up her own label, Aretha Records, in 2003, but failed to release any albums on it. This was despite her announcement in 2006 that new tracks had already been recorded for a project entitled A Woman Falling Out of Love.

In 2009 she sang the American patriotic song My Country, ‘Tis of Thee at the inauguration ceremony of newly-elected US president Barack Obama. Her hat, adorned with a huge bow, caused a considerable amount of press comment.

Following an operation in 2011, she struggled with health issues and cancelled a number of concerts. But in 2013 she returned to live performances with a concert in Detroit which launched a major tour.

Franklin’s own philosophy probably sums up why, despite the ups and downs of her career, she became such an enduring talent.

“Being a singer is a natural gift. It means I’m using to the highest degree possible the gift that God gave me to use. I’m happy with that.”

I have now taken out a Funeral Plan and chosen everything I want for my ‘Big Day’!  I… END_OF_DOCUMENT_TOKEN_TO_BE_REPLACED

‘I would like to thank you (Funeralhub). You have made me feel comfortable about some su… END_OF_DOCUMENT_TOKEN_TO_BE_REPLACED

‘It’s was about time someone took the bull by the horns and tackled this subject …. … END_OF_DOCUMENT_TOKEN_TO_BE_REPLACED